From digitalplaybook.org
Jump to navigation Jump to search

This section provides an Artificial Intelligence 101, including a basic overview, a summary of Supervised, Unsupervised and Reinforcement Learning, as well as Deep Learning and Artificial Neural Networks.

Artificial Intelligence (AI) is not a new concept. Over the last couple of decades, it has experienced several hype cycles, which alternated with phases of disillusionment and funding cuts ("AI winter"). The massive investments into AI by today's hyperscalers and other companies have significantly fueled the progress made with AI, with many practical applications now being deployed.

A highly visible break-through event was the development of AlphaGo (developed by DeepMind Technologies, which was later acquired by Google), which in 2015 became the first computer Go program to beat a human professional Go player without handicap on a full-sized 19×19 Go board. Until then, Go was thought of as being "too deep" for a computer to master on the professional level. AlphaGo uses a combination of machine learning and tree search techniques.

Many modern AI methods are based on advanced statistical methods. However, finding a commonly accepted definition of AI is not easy. A quip in Tesler's Theorem says "AI is whatever hasn't been done yet". As computers are becoming increasingly capable, tasks previously considered to require intelligence are later often removed from the definition of AI. The traditional problems of AI research include reasoning, knowledge representation, planning, learning, natural language processing, perception, and the ability to move and manipulate objects [1].

Most likely the currently most relevant AI method is Machine Learning (ML). ML refers to a set of algorithms that improve automatically through experience and by the use of data[2]. Within ML, an important category is Deep Learning (DL), which utilizes so called multi-layered neural networks. Deep Learning includes Deep Neural Networks (DNNs) and Convolutional Neural Networks (CNNs), amongst others. See below for an example of a CNN.

The three most common ML methods include Supervised, Unsupervised and Reinforcement Learning. The Supervised Learning method relies on manually labeled sample data, which are used to train a model so that it can then be applied to similar, but new and unlabeled data. The unsupervised method attempts to automatically detect structures and patterns in data. With reinforcement learning, a trial and error approach is combined with rewards or penalties. Each method is discussed in more detail in the following sections. Some of the key concepts common to these ML methods are summarized in the table following. 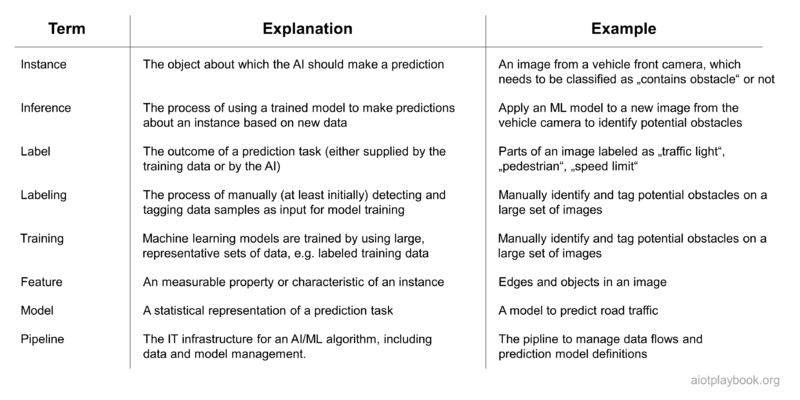 The models are trained on these labeled data sets, and can then be applied to previously unknown observations. The supervised learning algorithm produces an inference function to make predictions about new, unseen observations that are provided as input. The model can be improved further by comparing its actual output with the intended output: so-called "backward propagation" of errors.

The two main types of supervised models are regression and classification:

Some widely used examples of supervised machine learning algorithms are:

The next ML method is Unsupervised Learning, which is a type of algorithm that learns patterns from unlabeled data. The main goal is to uncover previously unknown patterns in data. Unsupervised Machine Learning is used when one has no data on desired outcomes.

Typical applications of Unsupervised Machine learning include the following:

The third common ML method is Reinforcement Learning (RL). In RL, a so-called Agent learns to achieve its goals in an uncertain, potentially complex environment. This can be, for example, a game-like situation, where the agent is deployed into a simulation where it receives rewards or penalties for the actions it performs. The goal of the agent is to maximize the total reward.

One main challenge in Reinforcement Learning is to create a suitable simulation environment. For example, the RL environment for training autonomous driving algorithms must realistically simulate situations such as braking and collisions. The benefit is that it is usually much cheaper to train the model in a simulated environment, rather than risking damage to real physical objects by using immature models. The challenge is then to transfer the model out of the training environment and into the real world.

A specialized area within Machine Learning are so-called Artificial Neutral Networks or ANNs (often simply called Neural Networks). ANNs are vaguely inspired by the neural networks that constitute biological brains. An ANN is represented by a collection of connected nodes called neurons. The connections are referred to as edges. Each edge can transmit signals to other neurons (similar to the synapses in the human brain). The receiving neuron processes the incoming signal, and then signals other neurons that are connected to it. Signals are numbers, which are computed by statistical functions.

The relationship between neurons and edges is usually weighted, increasing or decreasing the strength of the signals. The weights can be adjusted as learning proceeds. Usually, neurons are aggregated into layers, where different layers perform different transformations on their input signals. Signals travel through these layers, potentially multiple times. The adjective "deep" in Deep Learning is referring to the use of multiple layers in these networks.

A popular implementation of ANNs are Convolutional Neural Networks (CNNs), which are often used for processing visual and other two-dimensional data. Another example is Generative Adversarial Networks, where multiple networks compete with each other (e.g., in games).

The example shows a CNN and its multiple layers. It is used to classify areas of an input image into different categories such as "traffic light" or "stop sign". There are four main operations in this CNN:

A more detailed explanation of a similar example is provided by Ujjwal Karn on KDNuggets.

The field of data analytics has evolved over the past decades, and is much broader than just AI and data science - so it is important to understand where AI/ML is fitting in. From the point of view of most AIoT use cases, there are four main types of analytics: descriptive, diagnostic, predictive and prescriptive analytics. Descriptive analytics is the most basic one, using mostly visual analytics to address the question "What happened?". Diagnostic analytics utilizes data mining techniques to answer the question "Why did it happen?", providing some king of root cause analysis. Data mining is the starting point of data science, with its own specific methods, processes, platforms and algorithms. AI - predominantly ML - often addresses the questions "What is likely to happen?" and "What to do about it?". Predictive analytics provides forecasts and predictions. Prescriptive analytics can be utilized, for example, to obtain detailed recommendations as work instructions, or even to enable closed-loop automation.